On Sunday, January 15th 2017 we started a new church wide program called BELIEVE. All Kids Quest Classes, the Youth, and the Adults will all hear the same message on Sundays and learn to think, act and be more like Jesus. More information can be found on the BELIEVE website.

Believe You can Orchestrate a Better You 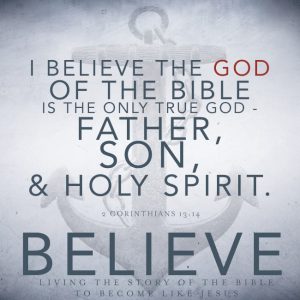 You can be a different “you” a year from now than you are today. Do you believe this is possible?  It’s as possible as an orchestra conductor making beautiful sounds out of a pit full of instruments.

As time for the concert winds down the tuning up begins. The oboes hit an A note. The horn section blows on their spit valves. The harp player gets plucky. The violins begin fiddling around. At first it sounds more like a cacophony than a symphony.

But then the conductor taps his magical wand on his music stand and mysteriously all the discordant sounds come together and transform into something beautiful.

Peter says the same can happen to a life.  In his second letter he writes to people who have been taught some false ideas by a group called the “Gnostics.” Their name came from the Greek word for “knowledge”: gnosis.  They said that they had a secret knowledge that no one else did and they were happy to share it with those less fortunate.

But Peter called them out in his letter.  He told his readers that they had “obtained a faith of equal standing” to his and the other apostles. No one had a secret knowledge. It was available to all. That’s good to remember. Whoever it is you may look up to in the Christian faith has no special access to God that you don’t have. God is an equal opportunity God. Peter makes that clear.

Then he adds: “His divine power has granted to us all things that pertain to life and godliness, through the knowledge of him who called us to his own glory and excellence, by which he has granted to us his precious and very great promises, so that through them you may become partakers of the divine nature . . .”

There is power available for change. But it’s not your power.  It’s God’s power. And Peter says it comes through knowing Jesus. It’s not just head knowledge, although that’s important. It’s a personal, intimate knowledge of Jesus.  The more you know him the more power you will experience in your life to be a “partaker of his divine nature.”

Understand, however, that this transformation won’t happen passively.  Peter tells his readers to “make every effort to supplement” their faith with new character traits. God is not opposed to effort. He is opposed to earning. “Effort” is needed to “supplement” faith with other virtues.

The Greek word for “supplement” is the word for “chorus.” Here in its verb form it means “to direct a chorus.”  He could be picturing life as made up of these different pieces of the orchestra and saying that you and I are responsible for bringing them together and directing them.  The word came to mean in Athens “to support, to equip, or to make provision for the chorus.”  Either way, Peter is telling us that God has given us all things for this transformed life but we have to intend to see change happen in our lives.
Peter knows what he’s talking about. He changed from a burly fisherman who quickly wilted in a courtyard—afraid he’d be thrown in with Jesus who was being beaten and crucified—to a fisher of men who could calmly write a farewell letter to his friends only a few months before his own death describing how change happens.

Do you want to be different in some way this time next year than you are today? God has supplied all the music you need.  Step up to the stand and begin to orchestrate his character in your life. Believe it can happen.